What is a Keyword promotion? How to create it?

A keyword promotion will allow you to engage with people who tweet using the hashtags and keywords of your preference.

Using a keyword promotion, you can specify the hashtags that you want to target and Tweetfull will auto like and auto retweet the tweets that contain those keywords. You can also choose to follow the people who tweet using keywords of your choice.

This will help in making your Twitter account more active and visible to other users. Let’s have a look on how you can create a Keyword promotion.

From the Dashboard section, select “Add Promotion” and choose the “Engage tweets by keywords” option. 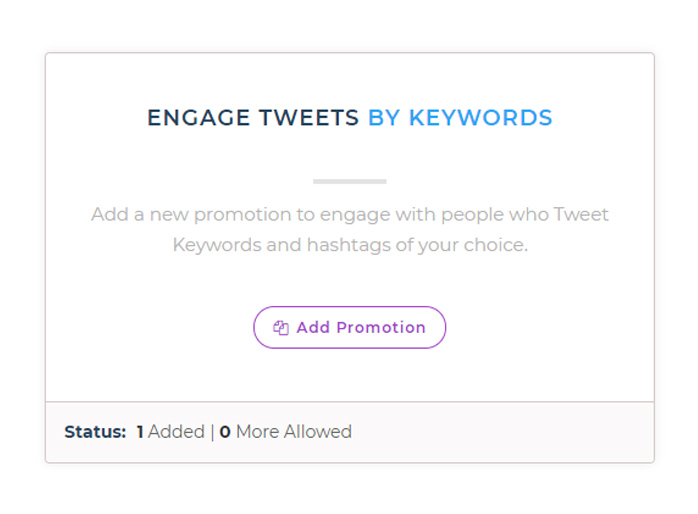 The process of creating a keyword promotion consists of mainly 3 steps:

In this step, you will be required to fill the following details-

If you want to know the kind of tweets that will be chosen, click on ‘Preview’ or jump to the next step.

This step will require you to fill in a couple of fields, on the basis of which your promotion will be highly personalized.

The final step of creating a keyword promotion is to mention the volume of Twitter likes, Twitter retweets and Twitter follows that you are expecting in a day.

Below that, you will find three options related to unfollowing people-

After all these fields, there is a list of 8 checkboxes that you have to consider for completing your promotion.

Preview all the details and save your promotion to make it live! Check the activities taken at regular intervals and see your account grow gradually.