What is Influence Them Promotion? How to create it?

Do you love the posts of your favorite influencers so much that you want to like and retweet almost all of them for your followers to see and interact? Well, you definitely require a lot of time to carry out this activity manually.

But, by using the “Influence Them” Promotion by TweetFull, you can build engagement on your account by automatically liking and retweeting the tweets of your favorite influencers.

This will help you in showcasing the kind of content you like and believe in. Also, when you share the posts of influencers, it can spark a conversation between you and your followers, which ultimately leads to an increase in engagement levels. Additionally, if you continuously retweet the posts of a particular influencer, they might notice it too and interact with your account! 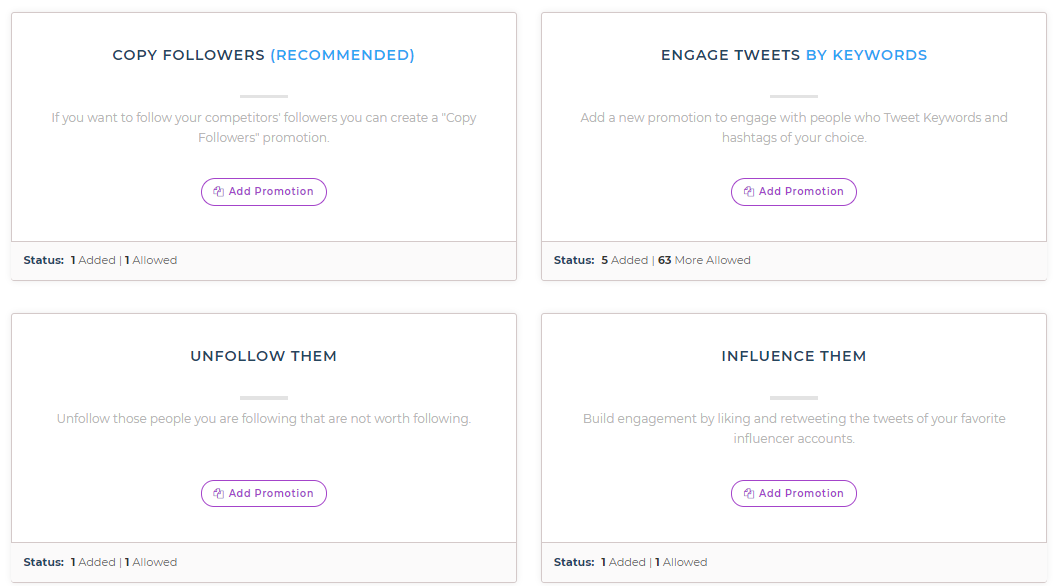 You will see the screen which requires to fill in certain fields in order to create the promotion. 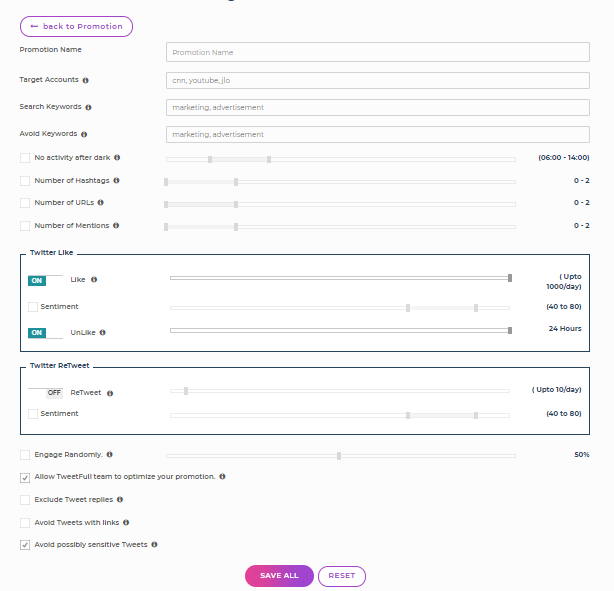 Let’s see what are these fields and the information that you need to provide.

Type in a name from which you can identify your ‘Influence Them’ promotion. It should be easy to remember and you should be able to distinguish between all other promotions. You can also write the names of influencers or the industry that you will target. For example, Marketing Experts Influence Promo.

Here, add the account handles of the people whose tweets you want to like and retweet. To obtain the best results, it is recommended that you add 2 or 3 accounts maximum here.

If you want the targeted tweets to contain any specific keywords, you can add them here. We will search for the tweets that contain any of those keywords. In case you want that the keyword must be included mandatorily in all of the tweets, write it in double-quotes.

Go for niche keywords that are popular or relevant to your industry. Adding two to three keywords is recommended.

The keywords that you enter in this field will be avoided. We will look for tweets that contain those keywords and avoid liking or retweeting them. This way you can skip engaging with the tweets that are not of your interest.

5. No activity after dark:

This option is for specifying the time during which you do not want TweetFull to take any action. For example, if you want TweetFull to remain inactive while you sleep or have meals, you can select the hours for the same. It is recommended to leave this option unchecked, so that optimum use of timings can be made.

Tweets with one or two hashtags normally get the best engagement. You might not want to like or retweet the tweets with a lot of hashtags. You can set a limit of the minimum and maximum number of hashtags that should be there in the targeted tweets.

A normal tweet may contain no URLs, or a maximum of one. Engaging with tweets that contain a lot of URLs may look like a spamming activity. Set the range or leave the option unchecked if you are not sure about the same. We will engage with all the tweets in a balanced way.

This relates to the number of accounts that people mention in their tweets. Generally, one or two accounts are mentioned in a maximum number of tweets - not more than that. Leave it unchecked if you are not sure whether you want to engage with tweets having mentions or not. TweetFull will optimize it according to your other preferences.

Here, you can set the limit of how many tweets you would want to like in one day. The maximum is 250 likes/day. If you are targeting accounts with a huge follower base, you can set a high number here.

As we will be liking a lot of tweets in a single day, it is suggested that you remove your footprints by unliking them after a certain period of time. It will help you in keeping your like count under check. Unliking the tweets after a period of 24 hours is recommended.

Here, you will be setting the number of retweets that you want to make in a day. The maximum limit is 250. But, we suggest you to go for a lower frequency, as every retweet is going to appear on your profile. You can choose a sentiment score for retweeting too.

Normally, all the tweets of the target accounts will be liked and retweeted as per your criteria. However, if you want to engage randomly, you can set the percentage here. For example, say that you set it to 50%. Now, if your target accounts tweet 10 times a day, then we will engage with any 5 of them, randomly.

Also, keep in mind the limit of likes that you have set per day in the ‘Twitter Like’ section.

It is recommended that you check this box so that our team can optimize your promotion to produce the best results.

In case you only want to engage with the first tweet in a conversation, check this box. It is recommended to keep it unchecked to get optimum results.

Many tweets link to a particular website. If you do not wish to like or retweet them, you can check this box.

This is an add on feature when you do not wish to interact with tweets containing sensitive topics. We will filter them out and avoid any kind of engagement with them.

Go through all the details that you have filled and then click on ‘Save All’ button at the end of the page to make your promotion live and running!